By 1963, the space race was in full swing. NASA had designated the greater Boston area as a general location for a new Electronics Research Center. Woburn wanted to to be a part of the action. Over the course of several months, government and business leaders rallied the resources of the community in an effort to attract NASA to locate in Woburn.

The City Council adopted a resolution requesting the Mayor and the District Secretary to Senator Edward M. Kennedy “to use their prestige and friendship with the President and Senator to decide favorably to locate the $6,500,000 space project here in the Boston area.”

The City Council held a meeting to discuss the location of the government project in Woburn and to see what could be done to persuade Federal authorities to act favorably upon the Woburn location.

Mayor John Gilgun appeared at the City Council meeting to explain his budget request in the amount of $10,000, including $1,000 for out-of-state travel, for a Development Commission to conduct preliminary work to acquire the NASA site in Woburn.

The City Council received a letter from Senator Edward Kennedy thanking the city for sharing the city’s  qualifications for the proposed Electronics Research Center. He advised that the site had not been selected and specifications for the construction of the facility had not been completed and that NASA informed him it was premature for communities to submit detailed proposals at that time. He did, however, forward the letter to NASA offices in Cambridge for consideration. [See letter below]

The City Council received a letter from Franklyn Phillips, Director of the North Eastern Office of NASA in Cambridge. He said the desire was to locate the facility “as close as possible to the local universities” to obtain the benefits necessary for a research project of this type. He pledged to contact the community once a detailed survey of the local area commenced. [See letter below]

The City Council received a letter from Paul Dembling, Office of Legislative Affairs at NASA in Washington, DC. He stated that Senator Kennedy had expressed the interest of Woburn in hosting the location of the NASA Electronics Research Center. He also forwarded the letter to the NASA offices in Cambridge where the Electronics Review Task Group was conducting the planning to prepare NASA “for prompt action” as soon as Congress authorized funding for the facility. [See letter below]

The City Council received a letter from the Woburn Chamber of Commerce along with a copy of a “handbook of statistics and proof of Woburn as the most desirable site” for the research facility, which was given to each Alderman. The Chamber thanked the “honorable body for the whole-hearted support and public spirit given to the Woburn crusade to attract NASA to Woburn.” [See letter below]

Ultimately, the Electronics Research Center located near Kendall Square in Cambridge in close proximity to MIT. Opened September 1, 1964 it would remain there until it closed on July 1, 1970. The location of the facility was at the center of a political tug of war as to what part of the country, let alone what part of the Commonwealth, the center would locate. But the local business and government leaders made their case for Woburn. It bound them together in a common mission to promote all the benefits of the city and to join in the larger mission of reaching the moon. 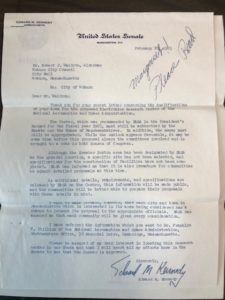 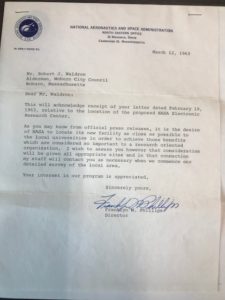 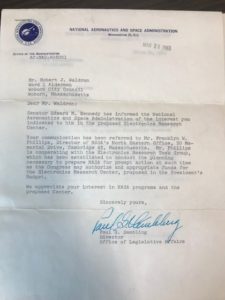 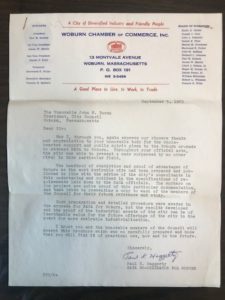