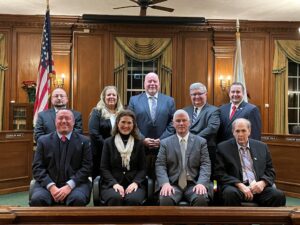 City Clerk’s Digitization Project – On April 20, 2022, the City Clerk’s office will be having files sent offsite in order to have documents scanned. This project is in efforts to digitize files to continue our ongoing modernization of the office and to ultimately have records readily available and accessible for review. The files we will be sending offsite include City Council Records from 2000 to 2019 and Board of Appeals Records 2005 to 2019. Please be aware that wait times for such documents will be impacted. We thank you for your understanding and patience during this process. If you have any questions, please contact the City Clerk’s office at 781-897-5850 or [email protected].

The Woburn City Council is the legislative body of the City of Woburn.

The Councilors are elected on the first Tuesday in November in odd-numbered years. All Councilors seats are open for election every two years. They take office on the first Monday in January of the following year. The President of the City Council is elected by and from the members at the organizational meeting in January and serves for two years in that position.

The City Council meets on the first and third Tuesday of each month at 7 p.m. in the Council Chamber in Woburn City Hall at 10 Common Street, except for July and August when there is generally one meeting per month. Committees meet as needed and generally meet on Monday nights.

License Commission to hold meetings on April 14 and May 5 at City Hall Issuance of ninth package store l...
Read More

All dogs residing in the city must be licensed with the City Clerk by March 15th to avoid a late fee. Dogs ma...
Read More
Feedback